There are 13 visible ship stats in this game, with a fixed 10th hidden stat which decides how fast the ships you control move when you control them.

Before you can sortie your fleet you have to decide a formation. The formation contains two separate fleets

During battle your Main Fleet gives fire support and air support at command using their respective buttons. You do not control much of the Main Fleet directly. The ship set in the middle of the Main formation (the gold platform) is the flagship and if she sinks then you retreat from battle.

The stats at the top right are the totals of the entire fleet in this order: Firepower, Torpedo, Anti-Air, Aviation, and Oil. 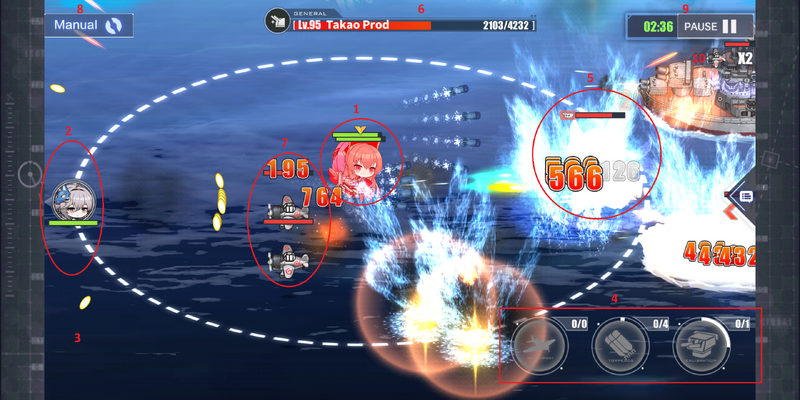 Above is a numbered screenshot of in game combat with functions marked and numbered.

The Combat Support Buttons are buttons that appear at the bottom-right corner and correspond to the available abilities your fleet can preform.

The three support buttons are:

On the map screen there is small arrow on the right corner, this opens the formation selection. Here there are four options which give various bonuses during battle.

All ship skills can be found here: Skills.

Community content is available under CC-BY-SA unless otherwise noted.
Advertisement